Tech scores with robots in Brazil 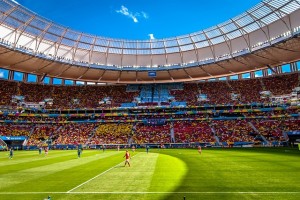 This week in Around the World, it’s cheap chips for India’s mobile market as Mozilla prepare to launch a $25 smartphone. The tech game-changers hit Brazil, with drone spies and exoskeletons defending the World Cup. Pressure mounts Down Under for computer coding in schools; meanwhile, up in Space it’s time for a coffee break – read on, below…

India: ever imagined paying just $25 for a smartphone? Within the next few months this will be the reality in India as Mozilla team up with local companies Intex and Spice to launch the new low-cost devices. Run on Mozilla’s HTML5 web-based mobile operating system, Firefox OS, and powered by chips from Chinese company Spreadtrum, the smartphones will ‘cater to the country’s masses’. (Mashable)

Brazil: take your eyes off the ball and look to the sky; you might just see a drone spy. At what’s been described as the most tech-savvy tournament in history, this year’s World Cup has attracted all the latest and greatest gadgets. From 3D printing to exoskeletons find out what the fuss is about. (Wired)

Australia: this week Down Under it’s been a battle of the brains as the country’s tech leaders argued the need for computer coding in the education curriculum. At a tech forum in Sydney, industry power players said the federal government ‘doesn’t understand technology’. Are Australians lagging behind? (Australian Financial Review)

Europe: who said European entrepreneurs lack vision…? It’s been revealed that since the millennium Europe has produced 30 billion-dollar tech businesses. Find out who joins Spotify and ASOS on the rich list. (Guardian)

UK: poor marks for gender equality in the UK with the Women in IT scorecard revealing that female tech staff are ‘in decline’. The industry may be flourishing but, according to the study, women make up just 16% of the workforce. See the stats at (BBC)

Italy: espressos in orbit! Leave it to the Italians to ensure a good coffee is never far away; even in outer space. When Italian astronaut Samantha Cristoforetti – Italy’s first woman in space – embarks on her mission to the International Space Station later this year, she’ll be bringing a much-needed espresso fix to her fellow astronauts. What does an espresso look like in Space? (Nature World News)