Searching for the next forward-thinkers 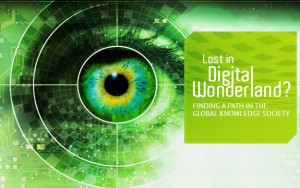 In the spirit of sharing views and ideas we ask you to ponder the question: Are we lost in a digital wonderland? If this conjures up ideas of ways to wade through the global knowledge society then this year’s Global Peter Drucker Challenge is a good place to vent your thoughts. In honour of Austrian writer, philosopher and management consultant Peter F. Drucker – who predicted many of the major developments of the late 20th Century, including the emergence of the information society with its necessity of lifelong learning – the essay and video competition aims to find the next generation of forward-thinkers. The only thing is you need to think fast because entry deadlines are approaching.

To give you a bit of background, for over six decades Drucker was reinventing our attitudes on management; coining the term ‘knowledge worker’. He authored 39 books, which influenced the development of both business and education management. Described as ‘the greatest management thinker of the last century’, Drucker shifted the focus of management to the people at a time when businesses were only concerned about maximising shareholder value. What was also unique about his approach is that he respected the values of education, personal responsibility and businesses’ accountability to society.

In regard to education systems, in his 1993 book Post Capitalist Society, Drucker addressed issues that are still relevant today: “The real challenge ahead is not the technology itself; it is what we use it for. So far, no country has an educational system that the knowledge society needs. No country has tackled the major demands.”

Drucker passed away in 2005, just shy of his 96th birthday. To uphold his legacy, since 2009, the Global Peter Drucker Forum has been bringing together high-profile leaders from across all sectors of society, prompting discussion on topics such as ‘managing our way to prosperity’. With sights set on the next generation, the Peter Drucker Challenge calls upon students and professionals up to the age of 35, from anywhere in the world, to submit an essay and/or a video covering the theme “Lost in Digital Wonderland – Finding a Path in the Global Knowledge Society” – with particular emphasis on personal insights and forward-looking perspectives that have the potential to inspire others.

Winners will receive a 1,000 Euro cash prize, and will also be flown to Vienna to attend the Global Peter Drucker Forum 2014″, taking place on November 13 and 14. Entries close for essays on July 1 and videos on July 15. More details can be found on the competition website.