The Around the World Hallowe’en special 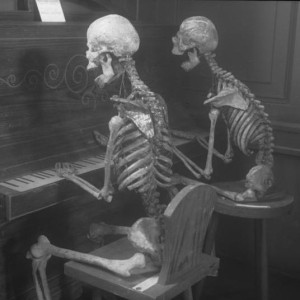 from a 1931 exhibition at Berlin’s Arbeiterschütz-Museum, teaching about correct body posture in daily life

Ghost schools, zombie universities, skeletons and evil spirits: it’s all here this week in an extra-cobwebby edition of Around the World. But we’re not forgetting the big stories – read on for information on Wikipedia’s pioneering service for Africa, India’s technological toddlers, and other bite-size morsels of the week’s top news…

KENYA: Wikipedia is trialling an SMS-based service aimed at Africa’s predominantly mobile-based communications scene. Users request pages via a short-code, which are then sent to them in text-message sized chunks (BBC)

PAKISTAN: a supreme court inspection found this year that 20% of government schools in southern Sindh are non-functioning or do not exist. Here’s a closer look at the reasons behind Pakistan’s “ghost schools” (ASIA SENTINEL)

CANADA: this is a country of vast distances and rugged terrain – something that can seriously disadvantage aboriginal and rural communities when it comes to education provision. This author takes a look at some ways in which participation could be improved – advice which could apply equally well in many other parts of the world (WESTERN PRODUCER)

INDIA: children as young as two are being given mobile devices for learning at a school in Mumbai – but this author strikes a note of caution (DNA INDIA)

NEW ZEALAND: a new game allows doctors to enter a virtual operating theatre to practice realigning and pinning fractured hip-bones – and while serious in function, the game’s involving gameplay could well appeal beyond the walls of medical schools (NZDOCTOR)

USA: what can we really learn from the Zombie apocalypse? (BBC)