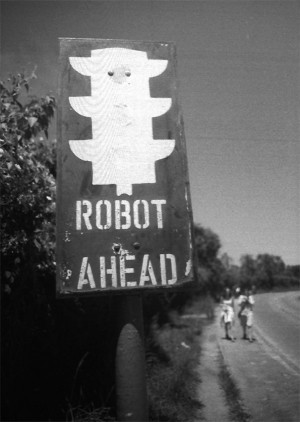 This week in Around the World, discover the small-scale tech innovation projects that could have a huge impact on the world of tomorrow, from Congolese robotics to Estonian startups. Meanwhile, Swiss languages get a technological boost, and the Dutch start thinking, well, not outside, but certainly about the box – read on…

CONGO: Kinshasa’s traffic is notoriously chaotic, while its underpaid gendarmes have often been accused of extorting money from drivers. But now there’s a new, uncorruptible force on the streets: giant traffic robots (NEW VISION)

UK: can you learn a language using only online tools, or should new information come from as wide a variety of sources as possible? The GUARDIAN wants to find out

ESTONIA: the Baltic state may be small, but it produces a disproportionately large number of startups. Here’s a look at some of them (BBC)

NETHERLANDS: it’s time to turn film technology on its side. Why shouldn’t screens be vertical? (INDEPENDENT)

SWITZERLAND: Romansh, the smallest official language of Switzerland, has gone digital. A fifteen-volume collection of literature from the last five centuries has been scanned and corrected by a team of Romansh-speakers. There’s just one caveat: one corrector cautions that some of the material is “mega-dull” (SWISS INFO)