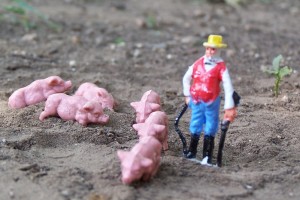 Male chauvinism and pigs this week, with news of a deep-set bias in how Wikipedia is created and a game helping to reduce the health risks associated with swine (it’s not Backgammon). Meanwhile, the US Government has been telling porky pies again, MOO(!)C students are becoming social animals, and an unlikely cause is identified for the bullish behaviour of the Chinese e-learning market – expected to grow an impressive 30% by the year of the sheep.

USA: another dramatic twist in the story of MOOCs. Once they were touted as the last straw for classroom education; now they are busy reinventing it, setting up stall in social venues across the world: recognising the value of social learning (BBC)

WORLD: according to 2011 Wikimedia Foundation survey, 91% of Wikipedia editors are men. This has dramatically skewed the encyclopaedia’s coverage of the world – the list of female pornographic actors since 1950 is longer than those numbering female poets and women in sport combined. But how can a system often intimidating to first-time users encourage more female editors? (BBC)

TANZANIA: pig farming is on the rise in Africa. But with the growing production and availability of pork comes a serious health risk: the tapeworm Taenia Solium, which affects 50m worldwide, and can cause epilepsy and severe headaches. A learning game, The Vicious Worm, has been developed to stem the advance of the disease – you can try it out here and help its further development (HEALTH CANAL)

CHINA: online education has an unlikely ally in Beijing: smog. That, at least, is the belief of company CEO David Xuelin Lee, who plans to invest a billion yuan in the sector over the next two years – because people soon won’t want to go outside anymore. China’s e-learning companies are bringing home the bacon, with 30% growth expected this year and 1,000 new entrants in the market in 2013 (WANT CHINA TIMES)

GERMANY: you might complain about friends who don’t pick up their phone. About the time it takes for some people to answer e-mails. But a postcard that takes over 100 years to get to its destination? Schweinerei! (BBC)