The archaeology of the World Wide Web

March 12th 2014 marks the 25th birthday of the World Wide Web. It was on this day in 1989 that Tim Berners-Lee submitted his original proposal for a “global hypertext system” to CERN, a system he originally titled “Mesh”. Over the next two years he developed the technologies it required: the first server, browser, HTML and HTTP. More importantly, he gave them away for free. Created by academics for academics, the World Wide Web is at heart an open learning resource, designed to enable the sharing of information between users and the creation of content.

“The original thing I wanted to do,” Berners-Lee has said, “was make it a collaborative medium, a place where we could all read and write”.

The vast expansion of the medium over the last quarter-century has all but obscured the traces of these early days. For many, they are just a vague memory of shrill internet-safe colours, clunky graphics, animated GIFs, and pictures slowly loading line by line down the page. So to refresh your memory of the 90’s net and celebrate its history, the ONLINE EDUCA BERLIN News Service has been delving into its dark undisturbed corners, uncovering some of its most ancient relics: dusting off the cobWebs. 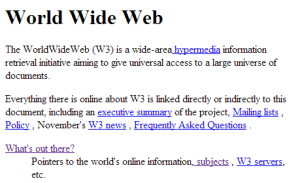 This is where it all began: Tim Berners-Lee’s original webpage describing the W3 project. Thought lost for many years, it was lovingly restored at its original URL for the 20th birthday celebrations in 2009. 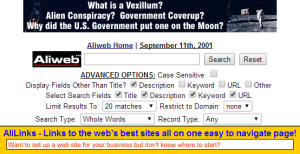 For a vintage searching experience, try ALIWEB. Still online, its screaming yellow background and excess of helpful links almost makes you wonder why they didn’t think of Google sooner.

GeoCities is the Atlantis of the Internet. One of the first sites to give people the ability to create their own webpage, it was once home to 38m users, and became renowned in later years more as a repository of sickening graphics, homespun GIF animations and all forms of early Internet bizarreness (including a sizeable community of foot-fetishists) than for the revolutionary social idea underpinning it.

To great protest, this early endeavour in social networking was switched off by its owner, Yahoo, in 2009. Only a few fragments remain… 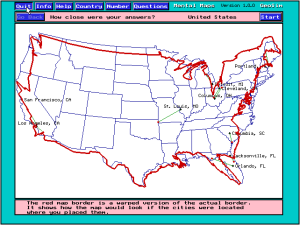 The World Wide Web is intrinsically designed for learning, and this could well be the oldest still-running e-learning site there is. Project GeoSim was, and indeed is, a project by Virginia Tech, providing learning materials online – which, with a bit of luck, you can still download at your leisure. Allegedly last updated in 2006, it doesn’t seem to have changed since the early 90’s.

ONLINE EDUCA, now in its 20th year, was there from the very beginning.  With help from the Internet Archive’s Wayback Machine, we’ve unearthed this lovably prehistoric-looking logo from ONLINE EDUCA 1997. We’ve come a long way since then… 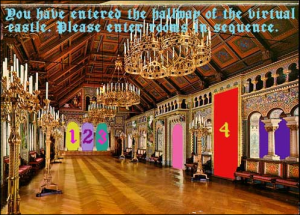 Is this one of the first attempts to create an online virtual world? Or is it just an exercise in peculiarity? Who knows? 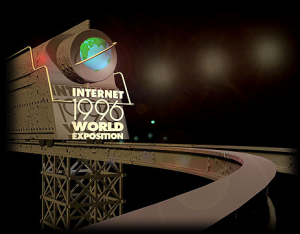 This year saw the start of a trend in Internet expositions – see a 1997 example here. The 1996 Internet World Exposition has not, amazingly, proved as temporary as many real-world exhibition-spaces. It is still there, but vast and empty, filled with the remains of its rusting exhibits and the ghosts of the fish from the “3D Aquarium” it once boasted; and while the stallions have long bolted from the “Museum of the Horse”, you can still check out the Letters of Support to see what governments of the time believed the Web was capable of.

Once a thriving community, now a museum, this sunny, sandy relic had it all – you could chat, read personals ads, find out about the best real-life beach bars, and send Pamela Anderson e-postcards, which were apparently all the rage in 1996. The cyber-beach post-office is still open if you want to send a vintage mail yourself. 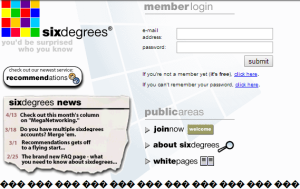 The ideas behind social networking had been around a long time. Dating websites had allowed users to create individual profiles, while other sites also let people list their contacts and find people they might know. Sixdegrees, however, was the first site that put these two concepts together.

Jurassic Park was always high-technology – with its genetic research, hacking, chaos theory and top-flight computer graphics. So it was only natural that when the sequel came out, InGen, the company responsible for the park, should get its own website. Here it is, now a living fossil in its own right. 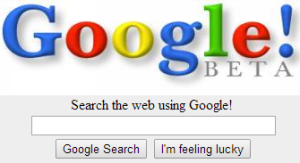 Google seems to have come into this world almost fully-formed. Well, there were more exclamation marks, and a bobbly, upbeat font – this is a happy-go-lucky young search engine trying to make its way in an already crowded world. 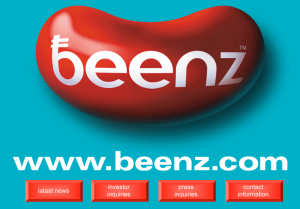 The dotcom boom and bust were not a disaster for everybody. They were, however, for some of the first incarnations of online currency, known (by typical dotcom baby-names) as Flooz and beenz. Launching a new currency is forbidden in many places, so these two websites had to work round the law, facing stiff opposition from many governments. Despite endorsement from Whoopi Goldberg herself, Flooz never gained much appeal except within the money-laundering community, who made up around 20% of its users.

Between them, Flooz and beenz managed to burn through around $150m. However, it must be said that the unwise excesses of the dotcom era did power huge development in Web and Internet technology – allowing us the capabilities we have today. 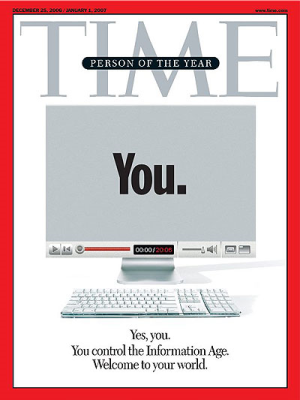 If you have a job interview coming up, you may like to mention in your CV that you were TIME Magazine’s Person of the Year 2006. Because you were. Everyone was – well, everyone involved in anonymously creating online content on wikis, YouTube, blogs and so on. For while the World Wide Web had long fulfilled half of Tim Berners-Lee’s original intentions – being a place where content was shared and read – it was only with the advent of sites like these that people were able to become fully involved in content creation.

Do you have a favourite ancient website? Tell us below!