George Siemens: ‘Students need to take ownership of their learning’ 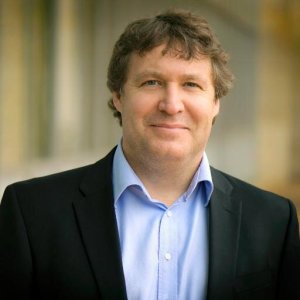 George Siemens is an internationally renowned and highly respected professor and researcher of technology, networks, analytics, and openness in education. Currently the Executive Director of the Learning Innovation and Networked Knowledge Research Lab at University of Texas, Dr Siemens has, amongst others things, been responsible for pioneering MOOCs, advised government agencies and numerous universities around the world on digital education and learning analytics, and has authored books on connectivism and knowledge processes.

A keynote speaker at ONLINE EDUCA BERLIN 2014, Dr Siemens spoke to OEB Editor Annika Burgess about how data is providing opportunities that teachers and educators can’t, why his latest ‘new-look’ MOOC has its critics and where he sees e-learning headed in the future.

As its OEB 20th anniversary, we’re not only reflecting on the past 20 years of e-learning but more so what’s in store for the future. What do you think will be the next big e-learning trends?

In higher education the credentialing pipeline is a significant trend and what I mean by that is that individuals are learning in a variety of spaces. They always have but it’s now being formalised more so, meaning that even though the certificate or the degree might come from one university they will likely have a patchwork of courses and learning activities – sometimes driven by cost and sometimes driven by just convenience that they are available.

So, the credentialing pipeline is going to be one of the more interesting innovations in the next several years because it will cause us to think a bit more differently around this process of degree granting.

Another trend in the US is competency-based learning. In different parts of the world competencies have a bad rap, if you will, because they are acquainted with training for corporate spaces rather than getting a degree. But, certainly the opportunities an individual has to work with competencies they gain anywhere in their daily lives is going to be a significant factor.

Even in Wisconsin, for example, there is the possibility for someone to get a bachelor’s degree without ever stepping foot into a university campus.

In regard to data and analytics – analytics are going to continue to be a growing factor in universities as organisations try to do a better job at facilitating student success. Particularly for students that fall into the under-represented environment in the US.

In regard to MOOCs, what do you think are the most important factors that need to be addressed to improve user experience and boost MOOCs to the next level?

There are a few things, but one is the interaction component – users need to have better opportunities to learn from each other. A lot of what’s wrong with MOOCs stems from how they emulate traditional classrooms, and so that means we are very heavily emphasising the knowledge of the teacher and the students’ activity in relation to that teacher’s knowledge.

To adopt better peer-based models where students are teaching one another; where you have models that allow you to serve as peer-evaluators and peer-mentors, and so on, I think that’s a key element.

Another aspect is to start using better use of data. Typically the current use of data is just for publishing, so the use is still very much a post-course evaluation when it comes to data rather than real-time.

Another crucial factor is the recognition that learners have different levels when they engage in MOOCs – this is for digital learning in general. There’s the need to start using adaptive and personalised learning approaches so that the existing knowledge of a learner determines or influences what we teach.

You recently launched the DALMOOC, which you created with a focus on improving the social experience of learners – can you tell me a bit about the structure and format you have chosen?

We call it a dual layer MOOC, but we don’t mean that in a binary sense, it’s more like saying there are two pathways to take. You can either take a structured pathway – the way that you see with a lot of MOOCs that are run, say, on Cousera or edX – and that’s a heavy teacher focus with guidance. As in, you click through to the next level.

We’ve created a second level that we’re calling more of the ‘social layer’ and we’re basically asking students to engage with one another and to create artefacts that reflect their understanding and to share those artefacts.

In the learning process we need different cycles of scaffolding – there are times when you come across a new idea completely and you can’t really create and socialise around it effectively because you just don’t know anything. So, there may be a cycle by which the learner follows a traditional structure or pathway but as soon as they become more confident they move into social and more emerging formats. In a way they’re oscillating between these two elements of the MOOC: structure and linear versus emergent and social.

How it has been received so far?

We’re three weeks into it now and there’s this real sense that because we stopped innovating with MOOCs the moment they were successful – if you take a MOOC today, you basically have the same structure as you had in 2011 when Coursera and edX were introduced – students have a certain set of expectations. They want that format, it seems.

So, we’ve had some pushback with students saying that they don’t like the creating artefacts model focus. So we’ve said ‘that’s fine, we realise that some students don’t want that. Stay on the linear path if that’s what’s important to you.’

To some level I wonder if it’s Pavlovian in a sense that you’ve  been conditioned to interact with it in a certain way, so when you get to a MOOC you’re expecting that structure and that content presentation and it takes time.

I had this with the first MOOC I ran in 2008 – the exact same experience that students pushed back and said ‘this isn’t learning; I don’t like this.’ But, even recently I’ve seen a dozen or two dozen posts over a couple of days that emphasise ‘oh, ok I’m starting to get what they’re saying.’

What we’re essentially trying to promote is enlightenment – being able to do for yourself what others have done for you. There’s this sense where you take ownership of yourself and your knowledge. Students need to go through an age of enlightenment with regard to their own learning – meaning that you own your learning process; you’re responsible for what you learn.  You’re in charge; you own the space where you post your artefacts and so on.

The theme of DALMOOC also ties in with your OEB participation, which is in the debate: ‘This house believes that data is corrupting education’. Going against this motion, can you give me a couple of examples of learning analytics that people may not be aware of?

Basically, we’re still importing our ideas from other fields – predictive models. Who is going to fail, who won’t and how do we provide support for them? But I don’t think that’s really where we want to get to with data and analytics; we really want to get to the point where we are providing an adaptive, personalised learning experience for each individual student.

If we can take the social networks that learners interact within and do a natural language analysis on top of those social interactions, we can get a sense of who’s talking to whom, what they’re talking about and what the learning implementations are of that. That’s something that a teacher or an educator by themselves can’t do.

I see analytics being part of – for lack of a better word – a cognitive aid for both the student and the teacher.

Data can be used to recommend courses for students; for example, the next course a student takes in university can be based on their profile, which then hopefully results in better learning results and retention for that student.

In a corporate setting, if you want to launch into a new market, in the past it would be an ad-hoc ‘who do we bring in?’ But now, with a degree of accuracy you can determine what the competences and skills are that are needed to be successful in this launch and who in our organisation has those skills. Once we have knowledge profiles we can be much more intelligent about how we take on new projects or how we move into new markets.