From telelearning, to analytics, social and wearables: 20 years of tech trends 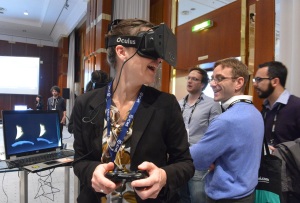 The once-familiar sound of a chirruping dial-up connection is now a distant memory for most, or totally unknown to those who have grown up in the years since broadband became the norm (in the UK, broadband subscriptions out-stripped dial up in 2004). The International Telecoms Union estimates that, in 2000, just seven per cent of people around the world were using the Internet. In 2014, this number is expected to hit almost 40 per cent, whilst smartphones will be carried in the pockets of over 1.75 billion users. The rate of change seems to be increasing as the extraordinary becomes the everyday.

Back when Windows 95 had just launched, in a not-long-reunified Germany, the sense of excitement about the role that new technologies were beginning to play in education prompted the organisation of the first ever ONLINE EDUCA BERLIN conference, with hot topics such as ‘Telelearning – Breaking New Ground and Charting Unexplored Terrain’ and ‘East-West Case Studies’ included on the agenda.

In the 20 years since, the world has witnessed the exponential growth of the telecoms, technology, software and digital media markets, as well as the impact of these changes on the way that we learn, teach and share information. As many trends have bloomed and withered in the consumer market – think pagers, palm pilots and minidisks – so they have in the world of educational technology, and OEB has been there to bring us the trends before they catch on and to shed light on those that will make it, and those that won’t.

An analysis of the conference’s programme since 1995 reveals the rise and fall of trends and terms in an often turbulent field. Whilst telelearning, video conferencing and distance education were at the cutting edge in the late 1990s, recent years have been typified by the explosion of data analytics, social media, mobile, massification, flipped classrooms and blended learning. Meanwhile, teachers and learner experience have remained at the core of discussions.

At the 20th edition of the conference (Berlin, 3 – 5 December), the convergence between the business and academic sectors is set to be a central talking point, along with the so-called maturation of MOOCs, adaptive learning, social media & bite-sized content, the ethics of educational data, cloud-based learning and coding.

The conference programme will also cover some ‘imminent trends’ that are emerging in other sectors but have yet to be co-opted by educators and educational developers. Think wearable tech, the Internet of Things, immersive learning experiences (such as the Oculus Rift), design thinking and the integration of technology into architecture.

Over the past two decades, ONLINE EDUCA BERLIN has grown into one of the world’s largest global ICT-supported education and training conferences, attended by over 2,000 participants from more than 90 countries, and continues to be the must-attend event for professionals working in and around learning, training and professional development.

Find out more about the conference programme and keynote speakers at https://oeb.global