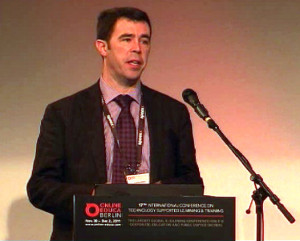 The evolution of e-learning over the past few decades has transformed teaching practices at universities to the extent that the humble online communities of the early 1990s are almost unrecognisable in today’s cloud of social media and Internet access on demand.  Keynote speaker Professor Huw Morris, Pro-Vice-Chancellor at the University of Salford in the UK, gave a speech entitled “Managed Learning Environments, Web 2.0, Cloud Nine and the Fantasy Palaces”, and he spoke of the radical and subtle ways in which learning cultures have evolved over the past twenty-five years.

Explaining the format of his presentation, Morris explained, “I reflected on my experiences of managing e-learning projects at four universities: Kingston University (1998-2000), the University of the West of England (2000-2005), Manchester Metropolitan University (2005-2010) and most recently the University of Salford (2010 to present).” Morris has long been involved in the introduction and management of various online learning tools, and he identifies a series of big ideas have structured the way in which people have thought about online learning and education.

In the early 1990s when the Internet was just starting to be incorporated into university teaching practices, many traditional universities were quick to embrace the notion of online communities of learners. Morris, who was working at Kingston University, adopted Blackboard technology in 1998 after having studied how it was being used in the United States. There were other learning management systems developed by staff and students, but in all cases it was soon clear that training staff and students would have to be an on-going endeavour. He says, “There were big ideas driving the changes, but we had to consider: ‘Who are we doing this for?’” The focus had to remain on the customer: the users.”

By the early 2000s, developers were looking at how the virtual learning environments (VLE) spearheaded by companies such as Blackboard and WebCT might be integrated with other information systems to form managed learning environments (MLE). While the interest in maintaining an online community of learners remained, universities became increasingly interested in tracking student performance.

Morris explained that since the mid 2000s, the ready availability of scripted online applications and services has enabled people “to develop a web presence with a minimum of financial investment.” A prolific range of Web 2.0 applications has since developed, with blogging software, social media applications, photograph, video and slide sharing services, as well as communications and messaging software forever altering the way universities conduct the business of teaching.  The University of Salford’s e-learning platform is a case in point, and Morris explained that while there is enthusiasm around the way in which students can interact in the learning space, it has nevertheless been necessary to invest in information literacy training and development materials for the staff and students alike.

As Morris walked the captive audience through his experiences, he reflected on how some pundits’ predictions have not come to pass. It was initially thought that using the Internet for education would mean a reduction in the size of university buildings as learners migrated to remote e-learning. However, in the UK universities have continued to invest in physical infrastructure, and students are still drawn to studying at a physical institution. The facilities, kitted as they are with modern lecture halls, libraries, multimedia systems and learning technologies are attractive, and thus arises the notion of ‘fantasy palaces’. “In the case of Salford,” explains Morris, “We are right at the heart of Greater Manchester’s media centre, having opened a new campus in Media City, a venture expected to create between 5000 and 15 000 jobs in the digital and media sector over the next five to ten years.” The university’s own radio and television studios are well equipped, and thus students, despite being accustomed to virtual learning still find reason to be enrolled in a physical place where they receive hands-on training.

Morris also spoke of how cloud computing and crowd sourcing are transforming learning. He said that “the development over the last five years of a range of specialist computing and data storage services has encouraged managers and other leaders in many companies and universities to consider the benefits, costs, advantages and limitations of outsourcing information technology services.” This fifth big idea is still unfolding, and how cloud computing will ultimately redefine e-learning is an outcome that educators and students eagerly await.

All of the OEB 2011 keynote speeches have now been uploaded in our media library, and you can watch Huw Morris’ presentation here.