The push for new learning cultures in higher education 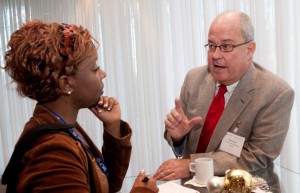 At Security & Defence Learning, a forum run alongside ONLINE EDUCA BERLIN on November 30th, 2011, dozens of participants gathered to hear researchers, security experts and military top brass expound on the developments in security training aimed at countering the emerging cyber threats brought on by today’s new security environment. Alan Bruce, the director of Universal Learning Systems, a Dublin-based education, research and management consultancy, presented a paper entitled “Innovative Learning and the Impact of Crisis: threat, opportunity, and demographic time bombs”. Prue Goredema later caught up with him for further insight into what it will take for universities to adapt to the times and how his company approaches workplace training.

In your presentation you spoke of the need to revisit the role of the university in the 21st century.  What should that role be?

The universities we have now are a reflection of the European middle ages, the time when most of them were founded. The idea was that you would have all knowledge there. The good news was that if you wanted to learn, you would walk to a university, sometimes hundreds of kilometres away. When you got there, you’d find a professor, a mentor, and then you would talk. You would talk for maybe two years, maybe ten years. Talking and learning. They didn’t do exams as such in those days: These systems came later. In the 13th century, people from all over the world came to Sorbonne [in France] and Cordovan [in Spain]. Whether Islamic, Jewish or Christian, they all participated, and scholarship was promoted. The idea was that it was open-ended, but it was still important for people to know how good I was.

So you’d have to defend your position much like postgraduate students still do in defending their theses?

Yes, and ultimately it would be about what I know, for I’d still be a student. But there was a hunger for knowledge and excellence. This changes in the early modern times because higher education becomes a licensing system. Now it’s not just about knowledge and wisdom; it’s about who gives you the permission to know. The attitude is now, “I can control what you know, and you as the student have to do as I tell you. I mark the exam, and I am the judge.”

So there are more gate keepers now…

Officially, higher education is about research and scholarship, but in practice it’s about assimilating knowledge in set ways. In the 19th century universities became industrialised, some quite elitist like Oxford, Cambridge or Harvard. But now we’re in a new situation. We see new institutions like MIT which are science-driven, or Caltech and Stanford. And there are others in other parts of the world, such as Brazil which are trying to give back. Nevertheless, they are still using that hierarchical model.  I think that we need to find a 21st century middle ground between good standards and real critical enquiry.

It sounds like a tall order for university lecturers…

Well, you have to consider the role that technology is now playing. I design postgraduate programmes for universities, and the lecturers tell me they are shocked at the numbers of students they are expected to teach. Sometimes 300 people are packed in the lecture hall, and that is astounding because you’d expect a much smaller class. It costs money. Typically, you have all those students just sitting there, not even listening to the lecturer. They have laptops open and they’re on Facebook whilst the instructor is trying to teach. Even if a lecturer calls order and says, “You’re meant to be listening to me,” the students will say, “Why? We know more than you.” If the teacher or professor is still there because they know more, that’s not relevant. So as an educator what you need to do is say, “I don’t necessarily know more than you, but I know more about learning.” So if my relationship with you is based on me knowing more than you, it’s an unequal one. It’s a controlling one. The lecturer is a subject expert and ought to be a guide.

Are you arguing that lecturers should shift from being a lone voice in front of the lecture hall and serve as facilitators in the learning process?

Exactly. That, and practicing, doing research and critical enquiry. So many students come out of university without new ideas and with no semblance of critical thinking. They don’t necessarily understand what they have been taught, but they have a piece of paper. Even then, that’s not enough. They have to go to the next level – Masters. But then that’s not enough because you only have a Master’s. Then you have to do a PhD and then a postdoc…After that comes the professorship, but of course no real work is done at that stage because the graduate students are doing all the work!  Education has become a business, commodification, the selling of information and know-how without true gains.

Is the traditional university immune to the emerging new learning cultures of learning?

There is certainly a new space emerging. I think it began with adult education and with universities having to design courses for non-traditional students. Back in the day, typical university students were fresh-faced youths straight out of secondary school. But now you have people seeking further education after having worked for several years. Today’s student bodies have a high proportion of non-traditional students, such as  women. Many women work; they have children and then they want to go to university maybe in their thirties when they’re free. They also have experience. They’re smart people, but they need that piece of paper.

You have designed courses for universities, government agencies and different domains. What are the key considerations for education and training in the 21st century?

I feel very strongly that immigrant populations present a huge opportunity. This has happened in under fifteen years, and we now have 400 thousand people, including 250 000 from Poland and 30 000 from Nigeria. I’ve worked with a group of women from the Democratic Republic of Congo who have set up their own businesses.  They’re smart. They have the attitude. They speak four languages. They’re in class because they need that licence, but they’re asking questions and challenging what they hear.  I love this. Universities have to move from the top-down licencing system because today’s students, be they immigrants, working parents or Web 2.0 addicts in the lecture halls, are sorely in need of tutoring that fosters competence and true understanding.

In your presentation, you mentioned the work you have done in transforming the learning culture of the police service. How did this come about?

When I received a call from the police eight years ago, I thought I was in trouble; however, they were inviting me to design a training programme for police officers. The immigrant community in Ireland now has a higher satisfaction with police because we have trained and integrated officers from all communities. We have the largest programme in Europe for non-native officers. With integration, you get better policing. Whenever we design courses—be they for staff development at a company or for a university, we look at the bigger picture and strive to keep the student fully engaged in the learning process. If true scholarship is the goal, a good university should be about the people: those who learn and those who teach coming together for a purpose nobler than that piece of paper.