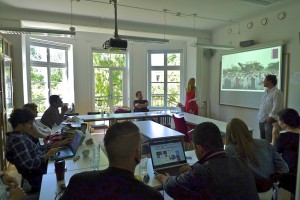 A few weeks into the fall semester, Bruce Maas, chief information officer at the University of Wisconsin at Madison, received an e-mail from his chancellor: A junior living in campus housing was frustrated with the wireless network, which he said often left him unable to connect to the Internet. Mr. Maas, who describes the university’s wireless capacity as “very robust,” asked his networking staff to investigate.

by Megan O’Neil. This article was first posted in the Chronicle of Higher Education

Wisconsin is no anomaly. Information-technology departments around the country are being tested by an explosion in the use of personal, Internet-capable wireless devices on campuses. Mr. Maas, who carries three wireless devices himself, says he recently talked to a student who uses 18. The phenomenon—sometimes referred to as BYOD, or “bring your own device”—is not confined to higher education, but has nevertheless created a unique confluence of demands on campuses, where the core customers have a voracious appetite for mobile technology.

Campus-technology officials say they struggle to maintain and expand wireless-network capacity in heavily taxed locations, such as lecture halls, common areas, and sports venues. They are excited about integrating wireless technology into classroom learning, but worry about safeguarding personal and research data increasingly viewed on mobile devices. Underscoring their concerns are budget realities and an obligation to transparency and collaboration.

“There are campuses that have a lot more resources than other campuses,” said Elias G. Eldayrie, chief information officer at the University of Florida. “In some areas, I do believe higher education has made great strides. In some areas, we still have a long way to go. For the most part I think we are all in the same place trying to figure out how to leverage the technology and bring value added to our organizations and our customers.”

College students are more gadget-laden than ever, reflecting a larger shift in consumer habits.

The growth in the use of smartphones—56 percent of Americans now own one, up from 35 percent in 2011, according to data from the Pew Research Center—means that many people no longer wait to sit down at a desktop computer to correspond with colleagues or check bank-account balances. The introduction of tablets like the iPad has fueled momentum in on-the-go computing.

In a survey conducted this year by the education-technology organization Educause, 76 percent of undergraduates reported owning a smartphone, an increase of 14 percentage points compared with the previous year. Fifty-eight percent said they owned at least three Internet-capable devices. Faculty and staff members are, like Mr. Maas, toting their own share of hardware.

“What has really happened over the last couple of years is the proliferation of a given student or a given staff member coming to campus not just with one device but with multiple,” says Brian D. Voss, chief information officer at the University of Maryland at College Park. “You will see now a student with a laptop and a smartphone, or a tablet and a smartphone, or sometimes all three.”

“These devices don’t discriminate whether the student is using them or not—they will hook up to a Wi-Fi network when they can,” Mr. Voss says. “So what we have seen is a rapid growth in the number of direct connections to our campus network.”

His department has roughly doubled the number of wireless access points, to nearly 6,000, during the past three years.