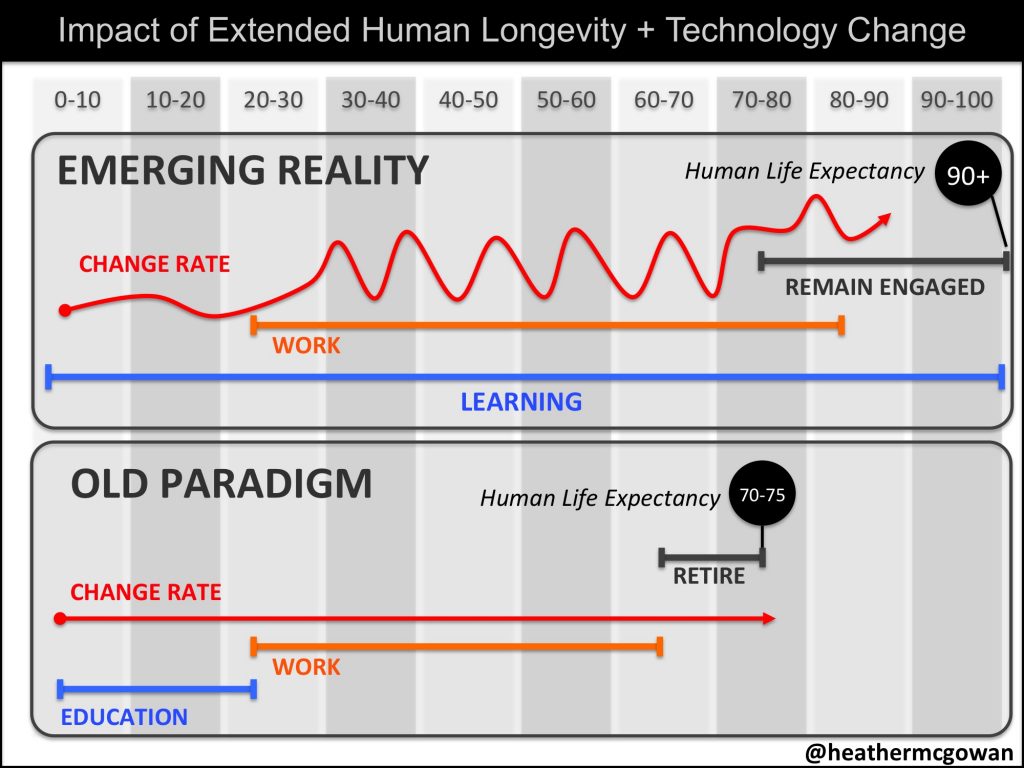 Change is coming at us with the greatest velocity in human history.

In the single second it took you to read the previous sentence, an algorithm executed 1,000 stock trades. Computers in Visa’s credit card network processed over three million transactions, no doubt a few of them providing payment for the 17 packages that robots helped pack and ship from Amazon’s warehouses. Right now, 56,000 Google searches are returning tens of billions of results links. At this very moment, more than 2.5 million emails are being sent, not all of them by human beings.

Technology is accelerating the pace of business at unthinkable speeds, so much so that the job you have today is changing as quickly as you read this page. If we can barely imagine one second’s worth digital deluge, how will we get our heads around the stunningly different future of work. Because, to be clear, the team you lead and the job you have today – if they exist at all – will be very different in 18 to 24 months.

For generations, new technologies – from the steam engine to the Internet and beyond – have fundamentally changed the nature of work and the economy. But it is happening faster now while we are living longer. Whereas our parents and grandparents might have experienced only one, or even no, significant change in their lifetimes, you have likely already experienced a dramatic technology-driven shift in your career. And your children will likely absorb a major shift every ten to fifteen years across theirs.

Let’s be very clear: there is nothing evolutionary or linear about this change; it’s exponential. Each step forward is double the past step, and the further we get along in those steps, the greater the change becomes. The early Internet gave us access to information when we sat in front of a computer to access it. Now that entry point is in our pocket, allowing us to access information almost everywhere we are. We will soon reach the point where all products and systems around us will have some intelligence, some ability to tap into the Internet, as a coordinated external neural network. Autodesk Fellow and thought leader Mickey McManus refers to this as the moment “when things wake up”. If every non-biological object around us has some intelligence connected by an external neural network, it is not hard to see that the algorithmic thinking of managing [known] processes can be almost entirely achieved with very few humans.

This potential reality is driving the dystopian provocations about the future of work. The “humans no longer required” mindset imagines only a world of existing paradigms and current work. We reject that dystopian view. We believe that we merely need to move past our systems of learning that merely codify and transfer existing skills and predetermine knowledge (John Hagel) to create a deployable workforce and instead focus on building agency and agile learning mindsets to empower future generations to thrive in learning uncertainty.

Bear in mind that according to research by the McKinsey Global Institute, only a fraction of our economies has been digitised: 18% of the US, 17% of the UK, 12% of France, and 10% of Germany.

This means that more than 80% of today’s economies still have the opportunity to build a new model before the digital economy disrupts them. The first fraction of the economy was digitised in a couple of decades, but due to the exponential change curve, the remaining 80%+ may happen even more quickly.

In short, the world is changing, and it’s changing quickly. The velocity of this change will unquestionably prove difficult for many. Yet it is also a tremendous opportunity for those who are ready to lead the shift into learning uncertainty.

McGowan and Shipley are collaborating on a book on the Future of Work due out in 2018. More information can be found at www.futureislearning.com