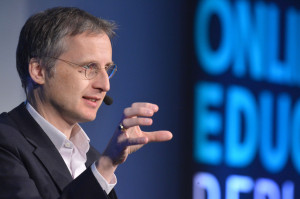 Statistics quoted by Dr Viktor Mayer-Schönberger show that in terms of the growth in the amount of data produced, the big data revolution is ten times the size of that caused by the invention of the printing press. Data has become an exceptionally powerful tool – allowing educators to correlate variables in learners’ study paths and outcomes. But the future may not be so rosy. To great applause, Dr Viktor Mayer-Schönberger warned the audience to keep data out of the control of single companies. These “data monopolies and oligarchies” could well be the tyrants of the hyperconnected future. 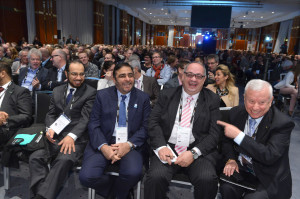 For the learner of the near future, in what Jeff Borden calls Education 3.0, “perception is everything”. Learning will be about using connectivity to achieve heightened awareness of the dimensions attached to a learning task, to achieve mastery of challenges and gain control of the direction education takes.

At the same time, as Gianpietro Petriglieri described, people are becoming more mobile: and the leaders of the modern age will be a “nomadic elite” who must use technology to provide the human connection – vital to leadership – to their roots. 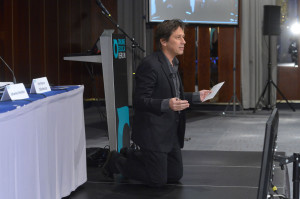 Debate
“This house believes MOOCs are doomed” – it was a motion bound to elicit high controversy. Crispin Weston opened forcefully comparing MOOCs to Ratner’s jewellery store – a company almost wiped out when its founder told people what they already knew, that the reason their jewellery was cheap because it was “total crap”.

It was up to Pierre Dillenbourg to answer him. His forceful rhetoric took the audience to a metaphorical Zermatt, at the foot of an imaginary Matterhorn, and asked them: what do you want to do? Not face the problems and go shopping in Zermatt, or take the challenge and climb this, the most beautiful mountain in the world? 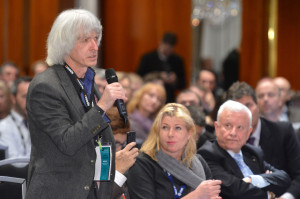 Gianpietro Petriglieri began by dismantling the “powerful narrative [of MOOCs], held by powerful people who don’t know better”. MOOCs are a charming illusion, he said, that appeal precisely because their promise of access is just that – an illusion. They will be remembered for asking the right question – but fail because they do not have the answer.

Johannes Heinlein opened in a combative mood, pointing out that the proposition were wearing ties – a sign of their traditionalist attitudes; to which Petriglieri retorted that it showed the proposition stood “not for what works, but for what is also beautiful”. Heinlein’s argument was that MOOCs are a self-improving system, where data analytics go towards improving courses, increasing engagement and producing more data to be analysed for even better outcomes, and so-on.

Lively audience participation continued throughout; and when the motion was put to the floor many remarkable opinions were thrust to the fore: one man, describing himself as a “heavy MOOCer”, compared MOOC aficionados and academia to a couple on the verge of breakup.

The motion was resoundingly defeated. 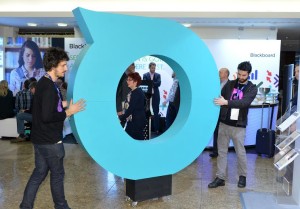 The Video EDUCA Masterclass offered participants a chance to get to know the world of video learning from the point of view of film and television producer Adam Salkeld. Through a mixture of clips – from Atonement, Raging Bull, The Social Network,  Baseball in the time of Cholera and others, he showed how great film is as a communicative medium, the tricks it uses to convey information and the ways it engages its audience. With input from the audience throughout, this was a thought-provoking and instructive presentation. 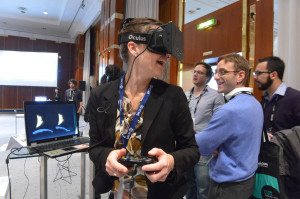 Research: Reflections on our Digital Identity was a deep look into what it means for students to be part of real and virtual worlds in the classroom. Nicole Steils asked provocative questions, such as: Why do people create attractive or unattractive avatars? Why do they sometimes create gender neutral avatars? At what point does the Avatar become you? The results of this research provided a fascinating view of our engagement with the online world today.

And a few quick tips:

Don’t miss out on your chance to enter a Virtual World using 3D glasses. Find them in the exhibition!

Today is the Nikolaustag, the German celebration of St Nicholas’ day. Make sure you catch the touring bishop of Myra on his way round the Conference, and pick up a Nikolausmann or four!