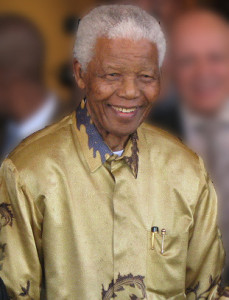 Nelson Mandela for decades served as the inspirational leader of worldwide opposition to one of the most roundly vilified systems of political racism the world has seen. His lifelong struggle against apartheid saw him spend 27 years as a political prisoner, eighteen of which he served at the notorious Robben Island prison. After his release on the 11th of February, 1990, he was elected president of the African National Congress, in 1994 becoming the first black president of South Africa, and the first to gain office through fully representative elections. Nobody did more in the post-Apartheid years to advance the cause of African education, and drive progress towards the goal of providing education to all.

His task as president of a liberated South Africa was to heal the deep rifts left by the apartheid laws of the 1950s and overcome the problems they had left behind – the huge wealth and land-ownership divide between black and white communities, the widespread lack of basic services such as sanitation and healthcare, and the legacy of racism. He directed huge energy towards the furtherance of education, in whose power to improve lives and destroy inequality he was a passionate believer.

“Education is the great engine of personal development,” he said. “It is through education that the daughter of a peasant can become a doctor, that the son of a mineworker can become the head of the mine, that a child of farmworkers can become the president of a great nation. It is what we make out of what we have, not what we are given, that separates one person from another.”

Politically, he took the route of national reconciliation, heading a cabinet representing the broadest possible coalition, that ensured the security of white South Africans within the “Rainbow Nation”, he led the nation away from nascent internecine and racial warfare, to democracy. This path of moderation, as much compassionate as pragmatic, left him vulnerable to attacks from all sides, even from within his own party. “Courageous people do not fear forgiving, for the sake of peace”, he said, demonstrating the mastery of the well-formed phrase that marked so many of his political statements.

Mandela was born into the Thembu royal house, on the 18th of July, 1918, in the village of Mvezo in Mthatha, Eastern Cape. Given the name Rohlihlahla, colloquially meaning “troublemaker”, he was christened Nelson on his first day at the local Methodist school by his teacher. He was the first in his family to attend school, and showed a keen interest in African history. His education, initially begun to equip him as a privy councillor for the royal house, eventually led him to take up a law studies at the University of Witwatersrand in 1943. It was here that he first became involved politically, becoming a founding member of the African National Congress Youth League under its first president, Anton Lembede.

1948 marked a turning-point in the history of South Africa: it was the year the Herenigde Nasional Party, campaigning for apartheid, won a general election only open to whites. Mandela, by then a rising star within the ANC, began to agitate for direct, non-violent action, following Gandhi’s example, against the segregationist new legislation brought in by the openly racialist government.

It was during this period, when the different groups opposing oppression, including Indians and communists, were uniting to form the Defiance Campaign, that he began to be influenced by communist texts. His embracing of them was to prove a stumbling-block: with Cold War politics distorting international opinion, the ANC and Mandela were painted by their oppressors as enemies of the West, with apartheid-era governments still receiving the support of allies in the USA and Britain. On 30th July 1952, the alliances Mandela had formed contributed to his conviction under 1950’s Suppression of Communism Act, which defined Communism so broadly that anyone seeking to change a law or oppose racial segregation could be sentenced under it: it was a muzzle for all those who attempted to protest even with peaceful and legal means. He was given a two-year suspended sentence of nine months’ hard labour and banned from talking to more than one person at once for six months.

The inadequacy of non-violent protest against the power of the state led Mandela to take one of the most weighty decisions of his life: the foundation of Umkhonto we Sizwe (MK), “Spear of the Nation”, a paramilitary that became the armed wing of the ANC. The organisation was dedicated to sabotage, the bombing of military institutions, power plants and other high-pressure, low-casualty targets, and announced its existence on the 16th of December, 1961. After a world tour to secure funding for the new organisation, during which he received guerrilla training in Ethiopia and Morocco, Mandela was arrested for inciting workers’ strikes and leaving the country without permission. Shortly after he was found guilty of the charges, the police raided the Liliesleaf farm in Rivonia that had served as the early headquarters for MK, and found documents linking Mandela and nine others to the bombings.

The decision to turn away from non-violence was not a hasty one, and Mandela’s speech at his 1964 trial shows how carefully he thought through his decision.

“We chose to defy the law. We first broke the law in a way which avoided any recourse to violence; when this form was legislated against, and then the Government resorted to a show of force to crush opposition to its policies, only then did we decide to answer violence with violence.”

Accused of sabotage and conspiracy to violently overthrow the government, the ten defendants at the Rivonia trial faced the death penalty. They presented their defence without witnesses, in the form of political speeches. “I am Prepared to Die,” the speech quoted above, was widely reported throughout the country and the world, leading the United Nations and the World Peace Council to call for the instant release of the political prisoners. The apartheid government, however, disregarded these pleas, and all but one of the accused were sentenced to life, and transferred to Robben Island.

The inmates of the maximum security prison suffered the harshest conditions: living in cells measuring 2.4m by 2.1m and sleeping on straw mats, they were forced to grind rocks into gravel and work in a lime quarry, where the glare from the lime caused permanent damage to Mandela’s eyesight. “The authorities liked to say that we received a balanced diet; it was indeed balanced – between the unpalatable and the inedible,” he remembered. Mandela, prisoner 46664, was a category D prisoner, allowed one visit and one letter every six months. He was also forbidden from attending the funerals of his mother and first-born son, Thembekile.

The years of imprisonment at Robben Island and Pollsmoor prisons saw Mandela become a figurehead for the international opposition to apartheid. Though his ability to influence politics waxed and waned, depending on the conditions under which he was forced to exist, his case and that of his co-accused were central to political discussions of the end of apartheid from the 1980s onwards. An offer of release in 1985 from President P. W. Botha, in the face of widespread violence across the country, was refused curtly with the statement “What freedom am I being offered while the organisation of the people [the ANC] remains banned? Only free men can negotiate. A prisoner cannot enter into contracts.” It was not until the fall of the Berlin wall that the South African government, under F. W. de Klerk, finally allowed Mandela’s release and the legalisation of the ANC. He emerged from Victor Verster prison, where he had been recovering from tuberculosis, on 11 February 1990, to massed crowds. The event was broadcast live across the world. 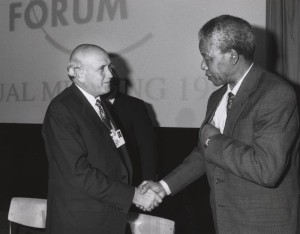 The next four years until the general election of 1994 saw political negotiation go hand-in-hand with continued bloodshed. Mandela, elected the leader of the ANC, had reaffirmed his intention to continue violence as a defensive measure against apartheid; however, as a moderate and opponent of all forms of racial hatred, he found the unity of his organisation in danger, and South Africa itself rocked by a rise in black-on-black violence, military action against the ANC and its supporters, and an unusual alliance of black secessionist groups and white supremacists. Guiding the country from a stand-off towards full democracy required delicate diplomatic and military manoeuvring with de Klerk; yet the fear that South Africa could go the same way as other African countries when shaking off the vestiges of colonial oppression helped to keep the negotiators at the table, and finally, an election was set for the 27th April 1994, and the ANC could begin the campaign that would bring Mandela to victory.

“In my country we go to prison first and then become President,” he wrote in his autobiography, A Long Walk to Freedom. For laying the foundations for democracy in South Africa, he and de Klerk shared the Nobel Peace Prize in 1993.

The presidency inherited grave domestic problems. On top of widespread poverty, with 23 of the 40 million-strong population lacking electricity or sanitation, there was the deeply-engrained hatred and mistrust, based on decades of human-rights violations, between the nation’s ethnic groups. To combat these, Mandela introduced the Land Restitution Act, restoring land taken under the Natives Land Act of 1913, and oversaw the creation of the Truth and Reconciliation Commission. Chaired by Desmond Tutu, it introduced a radical new approach to human-rights violations, placing the emphasis on reconciliation rather than retribution. Allowing amnesties for those who submitted testimony of crimes committed under apartheid, it was based on the belief that establishing and understanding the truth would aid the healing process. Its principles have been widely imitated by similar legal investigations since.

Mandela’s welfare spending brought electricity to 2 million, water to 3 million and education to 1.5 million previously unschooled children. But he was criticised for ignoring other issues, such as corruption, crime, and above all AIDS. By 1999, when he retired, 10% of South Africans were HIV positive. Admitting that he had neglected the crisis, he spent much of his retirement campaigning worldwide on this and other issues, becoming a powerful international statesman. A memorable moment came in 2005, when he announced that his eldest son, Makgatho Mandela, had died of AIDS, and called for more publicity to be given to the disease and its victims “because that is the only way to make it appear like a normal illness.”

As the central focus of one of the most dramatic events that accompanied the end of the cold war, it could never be said that Mandela ever faded from the public consciousness. However, and with characteristic wry understatement, he withdrew from public life in 2004 saying “don’t call me, I’ll call you.” He spent much time thereafter in seclusion, as the recurring respiratory problems, caused by the tuberculosis he contracted during his long imprisonment, had started to take a toll on his health.

To South Africans, he was the father of the nation, deeply and personally revered, often known simply by his Xhosa clan name, Madiba. He remains an icon of the struggle for democracy worldwide, remembered for his determination and courage in the face of overwhelming oppression. Stepping out of prison that day in February 1990, looking as regal and dignified as the day he entered it, he showed that an undaunted human spirit can survive the harshest degradations, on the way to freedom.

Nelson Mandela died on Thursday, 5th December 2013 at the age of 95. He is survived by his wife, Graça Machel, ex-wife Winnie Madikizela-Mandela, daughters Makaziwe, Zenani and Zindziswa, and his many grandchildren.