Can students create their own curriculum? 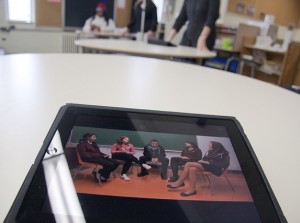 When students are given the opportunity to create material for classroom use, it can enhance their feelings of “empowerment, ownership and sense of purpose,” according to research into how educators and decision-makers can begin to prepare for the future.

But what if students are given the opportunity not just to create lesson videos and instructional content (already promoted by 25% of higher education institutions) but to design their entire class curriculums? Could it make learning feel even more relevant and authentic to students’ lives?

Julian Swindell, a professor at the Royal Agricultural University, believes so. He sees students’ skills and experiences as valuable resources that are often overlooked by teachers.

“It can be all too tempting for educators to view their role as the fount of all knowledge,” he says. “Often, educators will spend an inordinate amount of time looking for and compiling materials to create learning content. Why can’t the students do that looking and compiling themselves?”

In his undergraduate course on geographical information systems, Swindell encourages one group of students to ‘build anew’ a detailed technical glossary of the complex terminology used by geographers. A different group of students then act as ‘curators,’ selecting content that will be of greatest value to other students. The goal is to construct and share learning resources within a virtual learning environment.

Swindell is not the first to view students as potential collaborators in the design of their own education. In fact, there have been calls for more active student participation in curriculum since John Dewey in the 1910s. Some theorists have even claimed that doing so could make for a more active and critical citizenry who will then have the power to transform their communities.

“The teacher is no longer merely the-one-who-teaches, but who is himself [sic] taught in dialogue with the students, who in turn while being taught also teach.”

“Open innovation is well known in the higher education sector, though primarily as a tool for collaboration with companies,” he explains.

Hoellermann’s use of the term ‘open innovation’ involves giving students at his school the “opportunity to play an active role in the curriculum design of study programmes.”

Instead of the usual ‘top-down’ approach, students at the University Bad Honnef are allowed to suggest curriculum adjustments throughout the course and even submit entirely new course ideas to a platform called ‘Create Your Studies.’

According to Hoellermann, the experiment has led to the creation of several new courses and majors for distance learning students, as well as ‘dozens of service improvements’ based on student recommendations.

“So far, we were able to realise the two specialised programmes with the strongest support – (‘Taxation and Auditing’ and ‘Event Management’) and a new bachelor programme, (‘Health Care Management’)” he said. “The suggestions included ideas for course content, topics and modules.”

Sceptics of student participation in curriculum design question whether students have the expertise to create new classes and caution that ‘participation’ is always viewed in positive terms even though it’s not always clear what it means in practice. Calls to participation could also be viewed sceptically by students who aren’t used to the idea or who don’t believe they’ll be involved in a meaningful way.

But even if student-designed curriculums aren’t widely adopted, current trends suggest that participatory, or ‘creator’-oriented, learning environments will become more and more common in the future.

A recent Higher Education version of the Horizon Report says, “Higher education is now in a position to shift its curricular focus to ensure learning environments align with the engagement of creator-students and foster the critical thinking skills needed to fuel a creator society.”

What better way to foster a ‘creator society’ than by actively involving students in the very mechanisms of their own education?