A Fresh Start for E-Books? 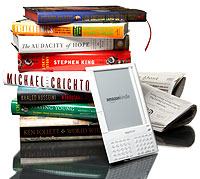 Looking at the market, e-books seem to be enjoying a great revival at the moment. In autumn 2007, online book-selling giant Amazon introduced its e-book reading device called Kindle. The white, iPod-coloured device targets readers of all ages and interests and needs no computer or Internet connection to get new content. Over a special mobile network, Amazon’s online e-books store offers 160,000 titles to date and the e-book reader has proved to be quite a success among American customers, although no official information on shipments is available.

Currently only the US can enjoy Amazon’s new e-book world, which is home to thousands of titles available any time and anywhere. But at the international Frankfurt Book Fair in October, the online bookseller is expected to announce Kindle’s European launch. Rumours are also on the rise that Amazon is soon going to target the college market with a new version of the Kindle that has a larger screen.

But Amazon’s competitors are also showing big interest in the e-book market. In August, at Berlin’s international consumer electronics trade show IFA, Sony introduced the e-book reader PRS-505 to the European market, a new version of its previous reader, which had been launched in the US in 2006. The gadget is as big and as heavy as an ordinary textbook and operates with many standards, including pdf-files. This opens the device for a greater variety of content than the Amazon Kindle, which uses a proprietary, copy-protected file format. Early in October Sony unveiled an upgraded model of its e-book reader. The new model PRS-700 offers a touchscreen, as well as an LED light, and will enter the US market in November. At the Frankfurt Book Fair later this month, Sony is also set to announce partnerships with notable content suppliers in an effort to make its reading tools more attractive to a broader market.

Accessing a text in digital format is fast and convenient, but many would-be users have observed that reading on the screen is uncomfortable and exhausting. The screens of notebooks, PDAs and mobile phones are just not suitable to read long texts. To avoid stress to the eyes, e-book gadgets like the Kindle, the Sony reader and the iLiad use what is called “e-paper technology”. The screens are not backlit, but rather reflect light just like normal paper and also need much less energy than LCD screens of the same size. Their good contrast and clear typeface make reading the text more comfortable than on any other screen.

Unfortunately, dedicated e-book readers are still very pricey, ranging from 275 US dollars for Sony’s device to 360 dollars for the Amazon Kindle. Considering that a brand new netbook – a low-end version of a notebook – is available for about 350 dollars and at the same time offers many more features, e-books readers might have a hard time convincing consumers that they’re worth the investment.

Despite the cost of the dedicated devices, there are, in fact, some factors that might help convince potential buyers to begin to regard e-books as useful replacements for textbooks. In terms of content, e-books are quite established, especially in the academic world. Almost every research paper is published in digital format, and many traditional textbooks are also available as e-books.

Having said that, a wide range of different formats exists in the e-book market, and there is no single standard that both offers great functionality for users and can also be viewed and accessed with any gadget in the same way. Especially for the academic world, this poses a problem in regard to proper citation. If no common standard is available, it is nearly impossible to cite an e-book effectively. Citations in paper books refer to pages and editions. These features need to be adapted for the digital version in a standardized way to ensure that users can find the part of the text referred to, no matter what e-book reader they use. Another problem is posed by digital rights management and the possibility of making copies of purchased digital texts.

A bright future ahead?

E-books still have a long way to go to become a real competitor to printed textbooks. Special e-book readers need to be affordable and digital texts need to be flexible, as well as open to other systems and technologies. What good is a note you can only view on your e-book reader but not on your computer later on? What is the benefit of a citation that can only be found in an e-book from one supplier or on a certain device?

A further challenge to be faced is more of the emotional kind. Readers and learners want to touch the book and to turn pages. The question remains whether we will ever leave behind the need “to feel” the text in order to work with it and also to appreciate it. Paper books are a treasure of humanity – the fear that the magic of books will get lost with new technologies is not unreal to many readers. The look and feel – and even the smell – of a book still play an important role. E-books must prove themselves with features that make them more attractive and less technical. They need to be seen not as the killer of a tradition, but its consistent further development.

A great blog post about current issues related to e-books can be found here:
http://blogs.zdnet.com/Ratcliffe/?p=372