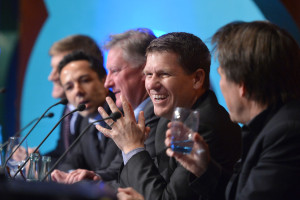 On the evening of Thursday, 5 December, ONLINE EDUCA BERLIN participants flocked to the plenary hall of the Hotel InterContinental to hear and take part in a debate on the future of open learning, with the motion: “This house believes MOOCs are doomed”.

It was a controversial topic – especially for an audience of e-learning professionals, people who encounter the MOOC phenomenon on a daily basis. Initial surveys suggested that the majority would side with the opposition: Pierre Dillenbourg, Academic Director of the Center for Digital Education, and Johannes Heinlein, Senior Director Strategic Partnerships at edX. The proposition, consisting of radical blogger Crispin Weston and INSEAD’s Associate Professor of Organisational Behaviour Gianpietro Petriglieri, had their work cut out to convince an audience of MOOCophiles that the innovation hailed as the future of education was in fact destined for failure.

Crispin Weston opened by comparing MOOCs to Ratner’s jewellery store – a vendor of tacky ornaments which was almost wiped out when its founder told people what they already knew, that the only reason their jewellery was inexpensive because it was “total crap… cheaper than an M&S prawn sandwich but probably wouldn’t last as long”. And he had good reason to do so: just a few days before the conference Sebastian Thrun, founder of udacity, had admitted in an interview that in MOOCs “we have a lousy product”.

After this powerful opening, he went on to examine the pedagogical principles of MOOCs more closely. MOOCs, he said, rely on “knowledge networks” – the online forums and socially interactive platforms that accompany MOOC classes in which, it is hoped, the real learning takes place. But social networks do not inspire the sort of creativity that teaching is really about: “the wisdom of the crowd” requires the sort of consensual interaction that is the polar opposite of independent thinking. 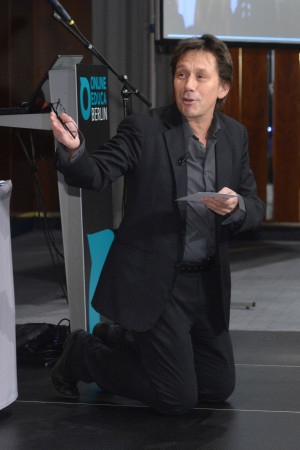 The only sort of education that has proved successful for inspiring independence, he claimed, is that which follows the Socratic tradition of “making mental efforts under criticism”. To demonstrate the demand for this form of education, he cited the fact that 40% of state school pupils in London have private tuition. The reason why MOOCs are doomed, he concluded, is that, by going straight to the massive level, they have abandoned the one thing that works.

It was up to Pierre Dillenbourg to counter his arguments. Sensing the audience’s support, he raised a few laughs with an ad hominem attack on his opponent: “well,” he said, “I’m not a blogger. I don’t get paid for repeating what Sebastian Thrun said last week”. But, he admitted, MOOCs have problems. But what do you do if you have problems with something as good as MOOCs? To answer this, he chose to transport the audience to the country of Switzerland, where he works, and imagine sitting in Zermatt at the foot of the Matterhorn, and ask them: “What do you want to do? Go shopping in Zermatt, or take the challenge and climb the mountain – the most beautiful mountain in the world?”

During the course of his speech he also took issue with the way MOOC completion statistics are compiled: pointing out that the reason many students do not complete their MOOC is that they have never really started it in the first place: they have simply taken the opportunity open online courses offer them of shopping around for the right class.

Gianpietro Petriglieri took to the stage next in order to dismantle the “powerful narrative [of MOOCs], held by powerful people who don’t know better”. MOOCs are a charming illusion, he said, that appeal precisely because their promise of access is just that – an illusion. Unfortunately, he pointed out, the typical MOOC students are not the disadvantaged they claim to give access to: “the typical MOOC student looks like all of us on this stage: they already have a degree, and are looking to continue their education in a specific direction.” It was hard not to think that the opposition looked a little uncomfortable. 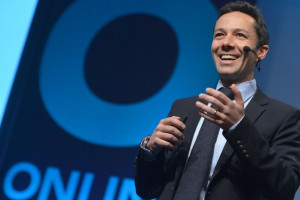 Greater discomfort was to come later, however, when it turned out to general surprise that of the four debaters only Johannes Heinlein had ever completed a MOOC. Petriglieri hastily defended his fellow speakers, criticising the “dangerous attitude” of saying that only those with direct involvement in a subject are allowed to take part in debating it.

Johannes Heinlein took the final spot with rhetorical relish. Standing up, he tore up his notes, and proceeded in a combative deconstruction of the panel’s neckwear choices. The opposition were in open shirts he pointed out, while the proposition were wearing ties: a clear sign of their traditionalist attitudes. To this Petriglieri retorted that it showed the proposition stood “not for what works, but for what is also beautiful”.

Heinlein’s argument, when he came to it, was that MOOCs are a self-improving system: currently in their early stages they are of course imperfect, but after data analytics have been used to improve courses, increase engagement and in turn produce more data to be analysed, outcomes will be attached to a positive feedback driving their continual improvement. 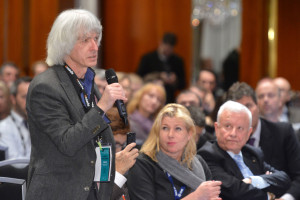 Lively audience participation continued throughout; and when the motion was put to the floor many remarkable opinions were expressed: one man, describing himself as a “heavy MOOCer”, compared MOOC aficionados and academia to a couple on the verge of breakup. And keynote speaker Prof. Mitchell Stevens, spoke up with an apparent determination to take the debate to a whole new plane: asking whether MOOCs are not doomed because of their traditional model – should we not say that the whole idea of a “course”, or of discrete educational provision in its entirety, is doomed?

Crispin Weston, in summary, identified a few points where he thought a consensus had been reached: perhaps what was wrong, he said, was not the online course itself, but the way it has been sold, as an educational panacea. But in the end, the propositions argumentation was no match for the fervent belief in progress, and the power of MOOCs, that was clearly present among the audience. As Pierre Dillenbourg put it: “standing still is not an option”.

The motion was resoundingly defeated.

For those interested in hearing more from Pierre Dillenbourg about this fascinating subject – and who wouldn’t be? – EMOOCs 2014 is the place to go. The conference, the 2nd MOOC European Stakeholders Summit, has four tracks: Policy, Experience, Research and Business; its goal is to develop synergies among European universities around themes such as student assessment, MOOC accreditation, platform interoperability and joint research initiatives. It takes place from February 10 – 12 in Lausanne, Switzerland.