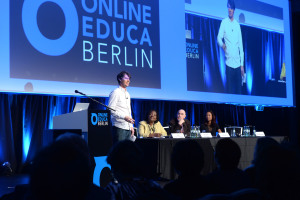 Day-one at ONLINE EDUCA BERLIN was buzzing – over 2,000 participants filled the opening plenary and then filtered out to join the numerous sessions, discussions and exhibition area; all eager to network and explore the latest technologies and trends that are shaping education and learning. OEB writer George Bodie was there to give us a re-cap.

Opoku-Mensah began with the matter in hand; outlining the impact of e-learning over recent years and the two most important future ‘megatrends’: big data and the cloud.

Howard Rheingold, who boasts years of experience at the cutting edge of e-learning and interactive pedagogy, followed. Giving a comprehensive briefing on the state of the technology and pedagogy, Rheingold delivered a convincing broadside upon the old-fashioned tenets of classic teaching methods. In a call for horizontalism in learning, Rheingold introduced concepts such as co-learning, ‘peerogogy’, and Wikis to replace traditional hierarchical models. It was a forward-looking lecture which set the tone for the rest of the plenary.

Lisa Lewin followed in a similar fashion. Beginning with the claim that an ‘explosion of access’ was the big story of education in the 20th century, Lewin claimed that we are now reliant on technology to continue that trend. According to Lewin, this remains a challenge. Indeed we may be, she contends, at the end of an ‘s-curve’ in terms of edtech. Lewin went on to propose four possibilities for going beyond this curve: innovation in brain-informed teaching, advances in data science, going beyond human limitations with automation, or the invention of a new ‘meta-science’ – ‘learning science’. According to Lewin, the prospects for progress could lie in any of these four developments.

With thoughts then very much set on the future, Mark Stevenson took to the stage to offer a vision of ‘the future – and what to do about it.’ Stevenson rapidly ran through his vision, noting the exponential growth of tech, which he sees as not letting up. Soon, according to Stevenson, there will be a one cent human genome, fuel created from carbon and 3D printed hearts to name but a few coming innovations. Digital may have just been “the cocktail sausage before dinner”. Stevenson ended the plenary on a positive note: claiming that rather than be overawed by this potential change, we embrace it.

In the session: ‘Higher-Tech Higher Ed’ several experts from various countries shared strategies for course design and integrating new technologies into curricula. What emerged was not only helpful tips but also a lively debate on how to incentivise the use of technology in higher education, particularly in light of the present funding focus on research.

A significant amount of focus was directed to the future of MOOCs throughout the day. One contribution that stood out was that of Jeremy Knox, a lecturer in digital education at the University of Edinburgh. Running through the thinking behind the MOOCs that Knox himself had played a part in creating, he provided a fascinating theoretical insight into the implications that the growth of MOOCs present for the role of the teacher. The conclusion, according to one member of the audience, was that ‘the teacher (at least as we know it) is dead’.

Elsewhere, the session ‘Breaking through to the hyper-connected student’ switched the focus toward the student, with Dr Maggy Beukes-Amiss steering a lively student panel through topics such as the perils and benefits of social media, Internet privacy and courses without deadlines.

The day ended, as usual, with a spirited debate. Debating this year’s motion; ‘This house believes that data is corrupting education’, were Dr Ellen Wagner from Predictive Analytics Reporting, Inge de Waard from the Open University UK, Professor Dr Viktor Mayer- Schönberger from Oxford University and Dr George Siemens from the University of Texas.

Speaking in favour of the motion, Wagner began proceedings by warning of the dangers regarding naïve or nefarious use of data, saying that data without context is of only marginal value. According to Wagner, we are at risk of turning data into merely a ‘meme’ of our hopes and dreams.

Dr Schönberger responded in effusive fashion against the notion, passionately positioning data as intrinsic to learning, and thus, human progress. Also supporting the notion was Inge de Waard, who pointed to the dangers of the digital divide and of algorithms being used for exclusionary purposes. Why, asked de Waard, in a time of budget cuts and job losses, was big data receiving so much funding?

Dr Siemens concluded the argument against the motion with three key arguments: firstly, that data will help remove the biggest divide in education, namely income inequality; secondly that through effective use of data we can manage previously unmanageable quantities; and thirdly that new challenges, such as automation in the job market, will require use of data. The motion was rejected (perhaps predictably) by a comfortable margin, although not before spirited input from a crowd buoyed by the complementary beverages, providing the perfect end to a fascinating day.