Learning the language of video 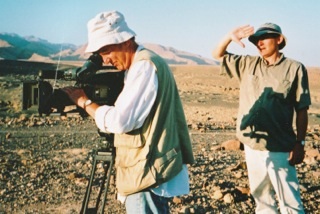 Adam filming for the BBC in Southern Iraq

From Hollywood to YouTube, watching movies will make your learning videos more engaging and effective. That’s the message Adam Salkeld, filmmaker and media executive, will highlight in this year’s VIDEO EDUCA Masterclass.

In this guest post, Adam provides a sneak preview of the session and shares his own experience of learning the language of film and video.

When I joined the BBC 25 years ago I embarked on a fascinating journey. Like generations of graduate trainees before me I had come to television from a traditional academic background. I was used to learning and expressing myself through reading, writing, listening and discussing. That all had to change. The two-year BBC ‘bootcamp’ was designed to wean us off words and onto thinking in moving pictures. It was an exhilarating experience. We learned from and worked alongside some of the industry’s most talented and inspirational filmmakers, storytellers and craftspeople. In edit suites, studios and on location we practised this new language until we were considered fluent enough to be let loose making programmes for the airwaves. And since then I have never stopped learning new vocabulary or idioms in the language of film.

More than anything else I have learned to appreciate the power of film and video as a medium – probably the most effective form of mass communication we humans have yet invented. It captures moments, emotions and stories forever. But it doesn’t just happen on its own – as anyone who has ever sat through an unedited wedding video can testify! You have to squeeze, craft and concentrate reality into an effective piece of film or video. Filmmakers have a whole toolbox of techniques to help them, ranging from camera and editing styles, to music, visual effects and sound design. Sometimes we go overboard with tricks, at others we do not apply our craft enough. The most talented learn the balance and never forget that they are telling a story.

I became interested in using the skills of filmmaking in digital education about 15 years ago. I was fascinated by the way in which the techniques of television could be harnessed to engage learners in the then relatively new medium of e-learning. The best teachers I could remember told great stories, so surely using the narrative power of filmmaking and combining it with digital interactivity would create the best learning resources. Despite having worked on some great learning projects since then I can’t help thinking that the best of video learning is still to come. That is why I am passionate about sharing some of the skills, disciplines and creativity of filmmaking with as many educators as I can.

Now I cannot promise that the Video Masterclass will distil all that I learned during my BBC training or indeed afterwards making documentaries all over the world. However, I can share some of the basics in the grammar of film and video. We can watch and discuss a range of clips and try to see how filmmakers manipulate the medium to get their message across. Most of all we can try to start thinking in the language of film. You may not believe that looking at Hollywood movies, with their multi-million dollar budgets, is strictly relevant for producing a learning video on next to nothing. But the rules of film are the same and I would argue that it is always a good plan to learn and be inspired by the best. Even the simplest techniques will help you attract and engage your learners. And apart from anything else it is also great fun!

Finally, as we gather for the 20th ONLINE EDUCA BERLIN and turn our minds to the next two decades of digital learning I cannot help but be optimistic. The YouTube Generation will not be needing the BBC bootcamp as I did. They are video natives – they have learned the language of film intuitively making and sharing their own videos. I look at some of their work on YouTube, Vine or Tumblr and I am impressed at the expert ease with which they communicate on video. The future looks very bright.