How to become a Self-Taught Techie – talking to Jessica Bell about technology, education, and internationalisation 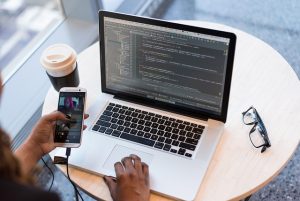 Jessica Bell’s degree is in International Relations, yet she works as a front-end web developer at the Washington Post and teaches coding at General Assembly. As a self-taught developer Jessica knows how it feels to be an exception to the stereotypical description of a “techie“. Her experience has led her to get involved in several community groups and projects focusing on technology and education, particularly as they are linked to women, people of colour, the LGBTQ community and others generally viewed as outsiders in the tech neck of the woods. We have talked to her about non-traditional pathways to technical careers and her session “Global Technical Workforce: A Discussion on Education, Technology, and Internationalisation” at OEB’s MidSummit conference in Reykjavik on 8 June, which will look at taking tech education international.

You started off as a specialist in international relations and then taught yourself the skills needed to now work as a full-time developer at the Washington Post. On this journey, what did you learn about the way tech is taught today?

I learned a lot about what it’s like to move from being relatively ignorant or having low technical literacy. In fact, when I first started, I thought people literally programmed in binary! I guess, though, I had an advantage because I grew up in the, 90s, so I was familiar with computers and understood the internet well. I did a lot of the journey on my own, with MOOCs (massive open online courses), online games that teach kids to code, and eventually a part-time boot camp with General Assembly.

I thought programming would be about learning the syntax of a language, but so much of it is about changing the way to break down problems, how to express an issue or function in the type of commands a computer can understand, and generally, understanding programmatic thought.  It’s fun, challenging, and interesting. However, the way it is taught has a major impact on whether or not people get inspired!

Going to a boot camp, you are sitting in a room with other people who are also total beginners. It was pleasantly different from so many intro computer science classes in university, which have people who have been tinkering with computers for quite a while and can be quite intimidating! The boot camp, in my experience, generally represents identities in a more diverse way.  I was neither the only woman nor the only LGBTQ person in my class, and that was awesome.  Boot camps are not a catch-all solution to making a technical workforce that is diverse, inclusive, and ready to work quickly, but they are an interesting exercise in asking ourselves where traditional computer science education might be failing us.

What are the advantages of self-learning, in comparison to going through traditional (formal) education?

Traditional university computer science is a big lift, but it won’t solve our need for a technical workforce quickly enough.  A lot of CS programs teach theory and tech that the everyday developer doesn’t use – and come at a high price monetarily and require a major time commitment.  A solid web developer doesn’t need to know how to write a compiler or operating system.  This isn’t to say that CS degrees or theory aren’t needed – they most certainly are; however, they aren’t ONLY way to becoming a technical worker.

Self-learning is hard; you don’t have a structure or support system, and there is SO much information out there that it can be hard to prioritize or make it over conceptual challenges alone.  In my mind, traditional CS gives you lots of concept theory, but fails on some of the practical needs of the workforce.

Boot camps, in contrast, are quick to react to the needs of the market and get people up and running quickly. However, they often produce developers who cannot operate well outside of the small niche they learned in class (at least at the beginning).  Relying on one or the other would be a mistake for us – but the two can learn a lot from each other.  Why do boot camps have more diverse student bases?  What does it take to get a boot camp grad to a high-performing mid-level developer? I will say that when looking at my boot-camp classmates, I see an incredible amount of grit and numerous creative ideas on how to solve problems often stemming from their previous careers outside of tech.

What were the advantages and disadvantages of starting out at your workplace as “a boot-camp grad” in an engineering department?

Ten or twelve weeks does not make a developer.  Boot camps are for-profit companies, and their marketing tends to set HIGH expectations. In reality, you learn enough to come out and be a good junior developer, but you’re going to need some help getting used to what it means to be a technical worker.  Version-control tools, command-line interfaces, debugging, technical debt, poorly written code, project managers who are non-technical demanding quick turn arounds, agile workflow, the list continues.  Tech is hard, but in my opinion, it is the most interesting job you can have.  Boot-camp grads are going to need some help with some of these things, and this takes time and effort from the existing engineering team.

However, boot camp grads have proven they can learn in a high-stress environment. They have the passion and grit to always be confused and behind the curve, yet they continue to build, learn, and grow, and generally, are sponges for technical skills. You can take junior boot-camp grads, invest a couple of months in them, and in the end have hard-working developers on their way to becoming mid and senior-level people who can also explain tech to non-technical people (since that was us!)

You like to remind the tech community of the importance of taking a global perspective. Why is this? Is it simply because of economic factors, such as globalisation, or are there other considerations?

This might be my own bias, but I think maintaining a global perspective in your career is very important.  Our world is becoming more and more interconnected through trade and globalism; through the internet and its influence; and through migration, immigration, and the ease and relatively low cost of travel. Tech is an interesting field of study, as it is becoming both a necessity to compete and survive in the current global market place – and also contributes to an equalling-out of access to education, opportunity, and community.  If you build a website, web app, or project, it can be accessed and viewed by people all over the world.

Is user experience something that is also tied to culture? Personally, I think so, as we all have different considerations when using a site in regard to what logical flow to getting around the web page might have come from the way someone was raised.  If you are building a big, global site – how do you manage translation, user experience, design, etc. to work in both Dallas and Kuala Lumpur.  Also, at least in the US, there is a lack of technical workers, and many companies are forced to either import technical workers, in the case of the H1B visa in the US, or to outsource technical work abroad. Workplace cultural communication, location-independent workforces, and in general, a more diverse group of developers on a project lead to the necessity of a global perspective.

Do you have a (personal) example of the potential dangers of not having a global perspective when building applications and teaching tech?

Translation is an interesting challenge for me as a front-end web developer. Translating language on a site can make it quite difficult to create a solid design aesthetic while keeping the site properly responsive. Let’s say I am translating a site, and the language I am translating to has a much higher character count that the original language. I am going to need to take that into account when I am building the page. What happens when this element doubles in size – how do the other elements react to it?  What happens if I am translating to a language that reads right to left rather that left to right? I need to align my paragraphs differently and make sure line breaks are happening properly.  When developers do not consider the international audience they might be building for, their site could perform radically different in different countries. This is a simple example. Also crucial are things like local internet access. If your customers are in a country that doesn’t have the best internet service, you don’t want a site that needs to load a bunch of resources to create the page, thus slowing down or breaking the performance. Developers might not always have the answers, but being aware of the possible problems is important for making the best site possible.

You are involved with many different communities in the tech realm. With your network in mind, what do you think is one small step we can all take to help ensure opportunities to make identities and voices more visible in formal education and in workplaces?

We all need to take stock of the way we have constructed our lives and the inputs we receive. If you have a twitter feed and the only developers you follow are men, well, you are going to internalize that. If you don’t even notice that the conference you are attending has no speakers of colour, to me, this is a moment to look at how we have built the view of our field.  Critically evaluating your inputs (who is writing and talking in the media we consume), seeking out diverse and inclusive communities, and listening to what they need from the field – and speaking out when you see too much group think or too many homogeneous identities filling a room – these represent some of the smallest possible actions we can take.  We are technologists and educators – we know how to do this: Start identifying the issue, note under what conditions it is presenting itself, talk to those who know more than you about how to solve the issue, try a solution, and iterate on it.

Are you confident about the future? If so, why?

I live in America, so this changes hourly right now.  I am disappointed that our country has taken a step back into populism and nationalism – and I see this as related to the continued issue of diversity and inclusion in tech. It’s hard to be optimistic right now.  On the flip side, my personal tech networks are so awesome: full of amazing women, people of colour, and white male allies. It also gives me hope that we have so much community organizing around, getting more diversity and inclusion into tech.

Do you have any concerns about the effect of rapid technological change?

Sometimes yes, I worry about the strength of our interpersonal relationships as well as what tech automation will mean for non-technical workforces.  Some technology connects us with our friends all over the planet and this is awesome. However, the screen time vs. face-time question makes me nervous at moments.  Seeing what is happening politically in the US (as well as the rise of nationalism and populism in Europe) makes me a bit nervous about what technical automation means for struggling industries.  It pains me to hear the American administration blaming the loss of manufacturing jobs on immigrants rather than its true causes, which are capitalism and technical automation.