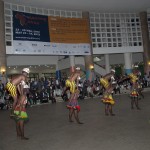 Max Ahouèkè, Benin’s Minister of Communication and Information and Communication Technologies, has closed the annual eLearning Africa conference which was held in Cotonou from May 23rd – 25th. Ahouèkè praised those gathered for the progress that has been achieved in implementing ICT-enhanced educational practices across Africa. He said, “More and more students now have access to world-class learning resources without the barriers of distance and cost. It is a favourable situation for politicians, educationalists and learners alike, and promises to bring about a revolution in African education.”

As Africa’s largest gathering of eLearning and ICT-enhanced education and training professionals, eLearning Africa 2012 attracted 1,483 participants from Africa and beyond with a total of 66 countries represented.

Speaking before a packed auditorium at the opening plenary session, Mitra presented his experiences of self-organised learning environments, including his famous hole-in-the-wall experiment and a new project in which retirees teach disadvantaged children via Skype. He called into question current schooling systems which are still based on dated Victorian standards that are far removed from the social, economic, political and technological reality of today.

Mark Jordan explained that with there being over 800 million Facebook users and with smartphone ownership at 500 million worldwide, technology was now undoubtedly the number one force bringing people together. He indicated that 64% of higher education CIOs expect to migrate more than 50% of their infrastructure to the cloud by 2015. Jordan referred to the constraining factors identified in The eLearning Africa 2012 Report, highlighting the impact of limited bandwidth, lack of human resource capacity and limited electricity supply as key factors affecting sustainability.

A riveting speech by Father Nzamujo set the tone for Thursday’s proceedings. Addressing Africa’s leading policymakers, decision makers and ICT and education experts, Nzamujo spoke of the value of ICT-enhanced education in uplifting the Continent. The matter of political will was highlighted for deeper discussion by a focus group which convened to discuss critical matters relating to eLearning in education, training and development in Africa and to look ahead to The eLearning Africa 2013 Report. The 2013 Report will be published at next year’s eLearning Africa conference which will take place in Windhoek, Namibia.

As the curtain came down on eLearning Africa, people continued to tour the exhibition stands which displayed key eLearning materials from Egypt to Japan, and colourful voodoo dancers entertained the participants.