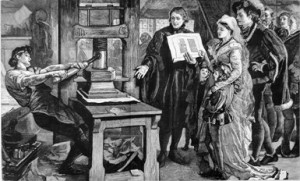 As e-learning has developed over the last two decades, it has become a vital part of government policy across the world. Edtech, as the European Commission made clear at ONLINE EDUCA BERLIN 2013, is becoming essential for ensuring equality and access within education, and a key tool for development, both in Europe and elsewhere. But what also became clear at the conference in December was that e-learning is part of a much greater process: and that the digital revolution in education is set to affect our lives in more ways than we previously thought.

Keynote speaker Viktor Mayer-Schönberger mentioned two revealing statistics in his opening plenary speech on big data. According to research he presented, the invention of the moveable type printing press in the mid-15th century – heralding the printing revolution – increased the amount of data in the world tenfold within a matter of decades. In a similar length of time, by comparison, the internet has multiplied the amount of data in the world by a hundred. The effects of digital technology on the creation and dissemination of information are a whole order of magnitude greater than that of the printing press.

As the expansion of data production continues around us, the long-term effects of this unprecedented change on culture, knowledge, politics and society are still uncertain. But we can look back to the printing revolution for an idea of the scale of the changes that are to be expected.

The Gutenberg press, uniting the mechanics of the screw press, used in European oil and wine production since Roman times, with the moveable type system, familiar in China from the 11th century but perhaps as old as the mysterious Phaistos Disk, allowed for the first time the production of books on an industrial scale.

Knowledge, which had been cloistered for centuries, kept in the hands of the monks and scribes who read and copied the manuscripts, suddenly and explosively achieved a level of democratisation. Ideas could spread across Europe and outside of traditional learning centres – allowing individual writers an unexpected revolutionary power. The reformation of the early 16th century, which saw much of Northern Europe shake off papal control, was spurred on by the widespread publication of Luther’s and Erasmus’ works;  by the 17th century newspapers and pamphlets were in production, giving individual readers the ability and means to hold their political overlords to account. And it was in this period that modern science, relying on the verifiable sources of recorded observation that printed books provided, can be said to have been born.

Dangerous though it is to draw concrete historical parallels, it would be foolish, in assessing the possible impact of digital technology, to ignore the fact that profound political, social and scientific upheaval are intertwined with technological revolutions.

Nor can it be ignored that this revolution had a crucially important education component – that, indeed, the changes that took place could be portrayed as having been caused by the dramatic increase in the availability of knowledge.

We are already experiencing a further democratisation of knowledge today. Print books are now available online, instantly, across the world; equal access is held up as the cornerstone of technology-enabled learning: but the digital revolution does not stop at broadening the reach of knowledge and discovery outside of traditional academia. Indeed, in recent months and years, its revolutionary edge has begun to assert itself more firmly.

The publication by Wikileaks and Edward Snowden of documents unmasking the activities of Western military, diplomatic and secret services was the inspiration for an in-depth discussion at ONLINE EDUCA BERLIN 2013 of “the end of secrecy and what it means”. Dr Harold Elletson of the New Security Foundation opened the session by talking of the political considerations the scandal raises: namely, that total secrecy is becoming impractical in the modern age. In the connected future, he said, “both secrecy and security will be impossible without consent”.

It will, for example, become impossible for a country to make a declaration of war based solely on its leaders’ interpretations of classified material, or conceal evidence of war crimes from its public in the interests of security. In an environment where anything an authority wishes to conceal can be quite easily compromised, the maintenance of secrecy is bound to become a matter of democratic choice: the people must be allowed to decide what their governments can and cannot hide from them in the interests of their own safety.

What the PRISM scandal also makes clear is that data is already a source of power in the modern world, and a hugely valuable commodity for those that can analyse it. As Dr Viktor Mayer-Schönberger put it, big data has become a way of bringing the whole world into focus at once: capable of deriving correlations between gigantic data sets, its revelations are set to prove as valuable to scientists, educators and health professionals as they clearly already are to the NSA and GCHQ.

Mayer-Schönberger also made his own call for openness. Speaking about data’s “dark side”, he warned against the concentration of data in the hands of data barons and the need to protect against a data monopolies. The beautiful thing about data, he said, is that “its value is not exhausted once used”; data should be shared, not guarded; and any entity that tries to do so is dangerously close to behaving dictatorially.

We clearly stand at a decisive point in history. Will governments tighten down their hold on data and concentrate this new power in a few hands, or will they decide that openness offers a more beneficial future?

In education, it is clear that openness is a fundamental requirement. The pursuit of knowledge involves the revelation of secrets, of the hitherto-unknown; education is the free and open broadcasting of this discovery.

As philosopher Leonardo de Arrizabalaga y Prado put it: “What is philosophy? The love of knowledge. And how do we love knowledge? We take its clothes off!”