‘All Learning Should Be Fun’: The Big Debate 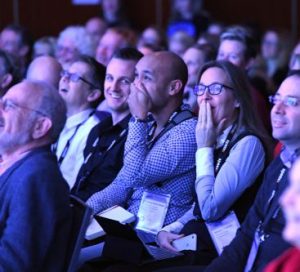 Do you remember that boring teacher who put you off what could have been your favourite subject? But what about the other teacher whose lessons were so enjoyable that you couldn’t wait for the next one?

We’ve all had teachers who managed to engage our attention and others who spectacularly failed. But what was the key ingredient that distinguished success from failure? Was it, quite simply, ‘fun,’ as the proposers of a motion up for debate in December at Europe’s top conference on learning and technology will argue?

At OEB Global in Berlin, which will take place from 5 – 7 December, a panel of experts, drawn from education, academia and business will debate the proposition that “all learning experiences should be fun.” And, in the age of game-based learning and virtual reality, perhaps it is at last possible to infuse all learning with a sense of enjoyment.

But isn’t there more to learning than fun? Isn’t a school more than a theatre or a playground? What about discipline, self-control and academic rigour? Doesn’t successful learning inevitably involve doing some things that aren’t fun but are fundamental and necessary?

Two teams of speakers will slug it out in front of an audience of hundreds of education professionals, managers and edTech entrepreneurs at OEB Global, which attracts over two thousand participants to Berlin every year for the annual conference and exhibition. The result, say the proposers of the motion, may all depend on what you mean by “fun.”

“The key,” says Elliott Masie, founder of the Learning Consortium and Head of the Masie Center, “is to view fun as engagement. Fun as challenge. And fun as curiosity driven.”

Masie will be supported, in arguing for the motion, by blogger Benjamin Doxtdator, who is also a teacher at the International School in Brussels.

“Learning holds the potential to be subversive – and that can be fun,” he says. “School can also be emotionally draining. But rather than trying to harden students by calling for ‘grit’, as teachers we have the opportunity to build classrooms based on love, kindness, and inclusion. We have the duty to help students find joy in and make their own fun out of learning.”

Such arguments are regarded with barely concealed derision by the opposers of the motion.

“Just as the food industry gets us hooked on sugary foods with no nutritional value, we’re guilty of pushing out learning games that are great fun, but lead to no learning,” argues Alex Beard, educator, author and director of the UK’s ‘Teach for All.’ “If you want to get fit, you know you have to put in hard work. If you want to get smart, you have to do the same to learn. Aristotle was saying this 2,500 years ago, ‘the root of learning is bitter, but the fruit is sweet’.”

His debate partner, learning designer Patti Shank, who is the President of Learning Peaks, is equally insistent that there are no easy paths to successful learning.

“Expertise researchers such as K. Anders Ericsson, Robert Glaser, and Michelene Chi help us understand the difficulties of building very high levels of performance,” she says. “Ask someone well known for their level of expertise how they got to where they are and they’ll likely discuss the amount of time and effort involved. In today’s fast-moving and rapidly-responding organizations, very high levels of skill and performance are needed to remain afloat. We need to implement learning strategies that make this possible. Cognitive science and educational psychology show us that designing for fun is often at odds with designing for high levels of performance. It’s past time for us to do what’s needed, what works, and what keeps organizations viable. The myths and folklore need to be put aside.”

The debate will be chaired by former UK parliamentarian, Harold Elletson, who is expecting some hard hitting in a no-holds-barred battle for glory.