Back in 1992 the Boeing scientists Tom Caudell and David Mizell coined the phrase Augmented Reality to describe how aircraft assemblers in Seattle were given head-mounted displays that showed them photographic images of their work enriched with layers of technical information. Now Inge de Waard, e-learning coordinator and researcher at the Institute of Tropical Medicine in Antwerp, Belgium, will report to the ONLINE EDUCA BERLIN conference in December on how her team trialled Augmented Reality in tropical medicine. De Waard, a pioneer of e-learning projects in South Asia, Africa and Latin America, forecasts that “AR will reach us, and change all of us, within five years”.

The Antwerp e-learning team started a pilot AR project early in 2010, looking for a tool that would help learners to visualise complex information, often difficult to explain in words or simple pictures.


Augmented reality (AR)
“… is slowly emerging as a possible learning tool for many disciplines. The new generation of AR, which in part builds upon virtual reality, was first limited to technological labs, and companies and institutions needed expert developers to come up with useful applications. Now, AR has become attainable for less technology-oriented educational institutes and training departments such as the Institute of Tropical Medicine.”
Inge de Waard, Antwerp

“We wanted to be able to visualise the progression of certain tropical diseases, and give extra information on each crucial point in the progression,“ Ms de Waard explains. 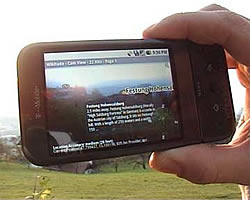 “We knew we would not immediately be able to achieve what we had in mind, but we could start projects to get there.“

The team has been pilot testing two AR techniques, a simple one based on Hoppala and Layar and a more complicated one using a combination of Google SketchUp, the AR plugin from ARmedia and the ARToolKit.

A City and Campus Guide

One of the first results is a guide to the city and university campus at Antwerp: If the user directs the camera of a mobile device at a building of the Institute of Tropical Medicine, he can add an extra layer of information, such as the details of the staff members who work in the particular building or a historic archive photograph of the building. The display shows both the real object and the virtual content.

“Technically speaking, this is a very straight forward AR application. You use ready-made software (Hoppala and Layar), a php script language and a mysql data server to add the relevant content to specific geo-locations,“ Inge de Waard says.

Their more advanced application involves creating 3D imaging and layering of content. They have tested small 3D objects using the AR plug-in from ARmedia, cinema4D and the ARToolKit and their first results will be shown at ONLINE EDUCA BERLIN 2010. The complete medical application may be ready for use against tropical diseases by September 2011.

A potential future application could help to improve epidemiological research.

“A researcher out in the field, studying a parasite that might be transmitting a tropical disease, can be equipped with a mobile device that will deliver augmented content on the different stages of the parasite. We can enhance a map of the up-to-date geographical distribution of the parasite with information on local weather conditions, altitude, presence of nearby streams or any other factors that might influence the spread of the disease. With this contextualised content a researcher will be able to project the progression of an epidemic more accurately and respond to it much more quickly.“

“The benefit of AR is that the student or researcher now has access to content that is really relevant, it will be contextualised and linked to that specific location.”

Integrating a global positioning system with mobile telephone technology and augmented reality has been revolutionary. With GPS, image recognition and an accelerometer, AR can pinpoint where a mobile camera is focused and then overlay relevant information at appropriate points on the screen.

nge de Waard expects AR to be used by doctors in remote areas of the world, allowing them to use the 3D anatomical models that enable surgeons to study body parts from all angles on a screen before conducting a medical procedure. The new mobile AR technology will allow them to use anatomical simulations previously restricted to clinics and operating theatres.
“Let’s say we have a patient with Buruli ulcer. On our mobile device, we will not only see the real ulcer as it is; the added virtual content will take us on a simulation, deeper into the ulcer layer by layer, allowing a successful surgical excision to be planned.” Additionally, the learner can move on to the advanced stage of the ulcer and see how it will develop if not treated, or how extensive skin grafting should be performed.

“These applications will deepen our understanding of medical conditions and diagnosis. It will give the learner a holistic medical understanding as well as details on anatomical and scientific coherences.“

Huge Potential – Not only for Education

A big challenge for AR in tropical medicine has been the poor connectivity and infrastructure of many tropical regions. But the team in Antwerp hopes to bring new technology to low resources regions with easy-to-use AR smartphone applications like Layar, Wikitude or Hoppala.
All in all, Inge de Waard is convinced that AR has a huge potential – not only for education.

“It is one thing to see pictures or a 3D animation on the screen. But being able to put our hand inside the virtual image, and move it around any way you want, will increase our knowledge of the real world.

“Looking at the ongoing development of AR in general, you can be sure that it will reach us, and change all of us, within the next five years.“

At ONLINE EDUCA BERLIN 2010, Inge de Waard will present Augmented Learning? Taking the First Steps for Education as part of the session Xtreme Learning which will take place on Thursday, December 2, from 14:30 – 16:00.